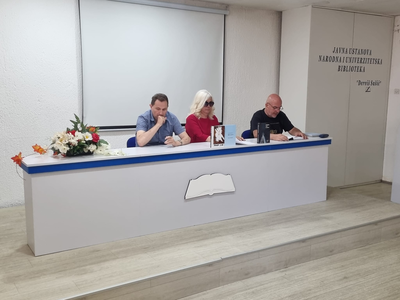 On 21 July 2022 in organization of the Association of Visually Impaired Citizens of Tuzla the promotion of the book by Ibrahim Milanovic „Victory over Darkness“ was held at the National and University Library „Dervis Susic“ which is the third autobiographical book from the trilogy. The event at which a large number of citizens was gathered was supported by City of Tuzla within the manifestation Summer in Tuzla and it was also followed by huge media coverage. The promotor was the Bosnian language teacher and a novelist Nedzad Milanovic from Bugojno who is the part of the team that organized Theater Festival of Bosnia and Herzegovina Fedra as well as Puppet Theater Meet of Bosnia and Herzegovina.

A critical review at all three books that make one whole was given by reading excerpts.

“Victory over Darkness” events are placed after war wounding of a twenty-one-year-old young man from Gornji Vakuf that led to the loss of his sight. The period of adjustment to blindness in his case lasted for a long time. Rehabilitation in Finland, where he still lives and works, helped him. It was courageous to put all of his life story into a book and share it with others. A connection with his family, especially his mother, runs through entire book. Planned recording of audio book will made it available to blind persons as well as other persons that are not able to read standard print.