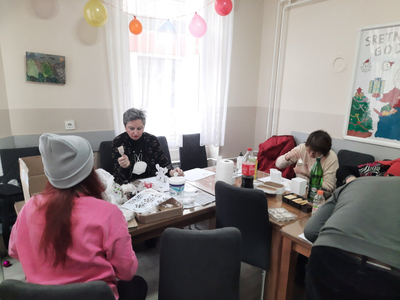 World Braille Day is acknowledged on 4 January since 2017. On that occasion, The Association of the Visually Impaired Persons Tuzla held a Public Forum in cooperation with the National and University Library “Dervis Susic” and the topic was The Role of the Braille in Education and Everyday Life of the Blind Persons.
Besides the members of the Association, mainly children and youth, there were other participants to include parents of the blind children and students of the Educational-Rehabilitation Faculty.
Tifa Tucic gave a short introduction with history of the Braille and the grace of Louis Braille’s heritage to the blind of the entire world. A couple of decades passed before Braille was recognized. It reached its full affirmation only after his death.

The accent at the Forum was at the role of Braille in learning foreign languages in accessible way and the example was the beginner’s course of German that is attended by ten members of this Association. Some of them were able to fit in with the program of German courses in regular conditions but they were forced to quit due to inaccessibility of school books and work books.
On this occasion, the fairy-tale by Simo Esic “White World, Colorful World“, printed by The Association in Braille, was presented and a group of actors lead by Sanela Babic, associate professor at the Academy of Drama Art Tuzla, recorded it in audio format. The famous Bosnian writer Simo Esic sent a very affirmative message since he was not able to be present at this Forum and he sent a greeting card to recognize the World Braille Day.

The employee of the National and University Library Amela Galesic use each opportunity to introduce students of primary schools who are visiting library to Braille. Mainly younger students had shown interest in acquiring new knowledge whose first contact with Braille on this occasion in the Library. Various promotional activities were agreed with the Association, Library and Educational-Rehabilitation Faculty. It is necessary to educate teachers in primary and secondary schools that the visually impaired children attend as well as their peers without visual impairment. This initiative is to be presented to the authorized institutions. In order to educate a blind student, the teacher should be educated on Braille usage. The role of education would be given to educators and rehabilitators given the chance they were employed by the school.

The media have shown a great interest in this event. Melis Omerovic, the nearly blind student who attends primary school in Sapna, relayed a message that was echoing in particular. To him, education in Braille was provided thanks to his dedicated parents and their selfless act of taking him to classes to the Association. His example can initiate other blind and nearly blind students to come out of the darkness that illiteracy brings. It is important that this piece of information on how to get education is relayed to others. Education in Braille is continuous activity of the Association and it is performed at the request of parents of the blind children or teachers of the schools the visually impaired children attend. Education is also offered to persons who lost their sight at their youth or middle age.

Braille is not commonly used in the society in the scope it is supposed to be. The blind persons who are not educated in Braille are not aware of its advantages. The question raised is whether we do enough to make changes. Regardless to positive steps the Association makes to include issuing various publications in Braille, it is necessary to do a lot more. It is wrong to talk about Braille only at the birthday of its inventor. It is high time that visually impaired persons and their organizations realized that the society would not give anything unless they requested it by themselves. This includes use of Braille and its legal recognition.